What is it about?

Archetype mostly oriented in swarm/consume strategy carried by cards like Plague Maiden– enabling you to create many beasts very quickly and using Morvudd to boost all these beasts by 1. The weakness of this archetype is the inability to put out beasts on board, except for Plague Maiden and having only one perk from swarming like that is not satisfying (most of Beast decks used to play Bone Talisman, which struggles if your little beasts get answered). Lambert Sword Master, Lacerate, Tin Boy, Glustyworp– all these cards sound like a nightmare for every beast player. To make this archetype playable we have to protect it from such threats and add more playable beasts making it not rely on just two cards.

First, we should think about a leader ability for that archetype which now doesn’t exist. In the past Death Shadow was one of the easiest choices for beasts- replay a Plague Maiden, be able to swarm 2 rows very quickly without the help of Caranthir was something that made sense. This ability wasn’t the worst choice, but it is weak against any type of row punishment, locks and cards like Invocation or Sirocco Heatwave which both exist in meta. Also, this type of deck forces you to play actively all 3 rounds otherwise you will overswarm round 3 pretty hard (beasts don’t have tools for winning round 1 easily, it is a combo oriented deck). Leader ability as I said is not the worst but Gwent has the potential to create a new one that could have more synergy with other beasts as well.

The King of the Beasts

Force of Nature is a leader ability that does not see much play, so I see no problem in reworking this ability. In order to help beasts as an archetype, a rework of this ability should be mostly oriented in protecting our combo pieces and beasts from dying. There are 2 ways of doing it- one is making this leader ability be able to play an additional card from the deck with some restrictions, like “Play a 4 provision card from your deck, increase provision number for every different unit tag in your starting deck”(would work well with existing beast decks which don’t really play beasts but usually spawn them)- This ability lets us play Plague Maiden– consume that with a Slyzard and then play Morvudd, all in one turn. It might be a good finisher but probably not the best one, this leader ability might turn out better with other archetypes and make beasts dead again.

Beasts need a leader strictly supporting the archetype, one such as:

This ability could be built around an effect called The Roar of the Forest, which would give each allied beasts +1 buff, but would disappear after a pass. Someone could ask: what does this effect achieve if it disappears after we pass and our leader is not contributing to the final result? Take my word for it that this leader does something more. There are 3 ways of getting points from it- the first one is when we consume some of our beasts (each beast consumed gives us an additional point). Second one when our opponent is forced to damage our beasts (every damage is +1 extra point for us). And lastly- we can protect our smaller and bigger boys from every kind of damage. If someone has noticed the leader has very good synergy with one of the beasts, which is Forktail, but we’ll get to this soon. Let’s consider this leader as a starting point in building the archetype and let’s talk more about reworks of some cards.

Cards which work well with archetype and don’t need any changes:

–Vran Warrior (beast, whenever a unit is destroyed during your turn boost self by 1),

–Tatterwing  (beast, deploy: Destroy an allied unit and boost self by its base power),

–Adda: Striga(beast, Cursed, Deploy: Damage an enemy unit by 2. Dominance: Damage it by 4 instead),

–Griffin (beast, deploy: Destroy an allied unit on this row. If there are no targets, destroy self)- This card is surely better for a big MO deck nonetheless, it has a beast tag.

–Forktail(beast, deploy: Damage all other units by 1.) This card works extremely well with the new leader ability which would make forktail see a lot more play.

First I would like to create a new keyword for beasts.

Pack X- trigger this ability if there are X allied beasts in this row.

Let’s start with consume cards that can generate a lot of value in this archetype.

First we could tweak a few cards and add Pack keyword to them:

Adding this Pack ability to Slyzard makes him less vulnerable to tall punish. This change should help monsters fight against poisons, resets and other tall removal cards.

With the reworked leader this card will enter the board as a 6 point body. Not only can it trigger deathwishes, but will also achieve more value the wider we go. This card won’t be playing into tall removal as well, however, it is more exposed to middle range removals like Gigascorpion Decoction or Parasite and is notably weaker in a shorter round.

Celaeno Harpy was too weak to remain unchanged. At the same time I decided to buff Harpy Egg lowering its provision and base power by one. Someone could say this is not a buff, as numbers are going down for both provisions and power, and while that’s true the important difference is it dropping from 4 to 5 provisions. Four provision cards are the cheapest in the game, aging 2 four provision cards to your deck is much better than 2- 5 provision cards, even with 1 point less on each egg. Two provisions are far more important than two points, and with Force of Nature this is still the same Harpy Egg with 1 provision less. Back to the topic, Celaeno Harpy seems to be quite strong with this change. If that’s the case her provisions could be increased by 1.

This little buff should help this card in becoming more viable. Over lots of patches many bronzes got bugged to achieve higher value while this card remained unchanged since the beginning of homecoming.

Other Types of Cards

Reworked to resemble a similar card from NG Alba Spearman.

Werecat could be very important in a beast deck, boosting all allied best units on a row helps us capitalize on our swarm strategy.

Manticore venom is one of the most dangerous venoms in the whole Witcher universe, that’s why I decided to change this card. Monsters are one of the most neglected factions when it comes to tall removals. Having only Imlerith’s Wrath, most of Monster players are forced to play neutral cards (like Sirocco Heatwave or Geralt of Rivia) which are not the best choices. This problem could be solved by adding a few person cards to MO.

I made a mistake while designing this card- pack 4 ability should say “instead”, so that Alpha Werewolf is not boosting self by 3 each turn. It is very similar to Saul from SY.

Card that monsters should have. 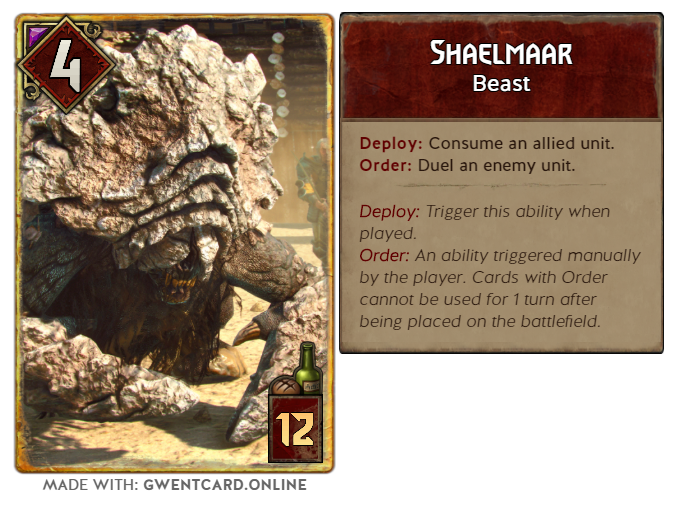 Good control card which would definitely give monsters more reactivity. 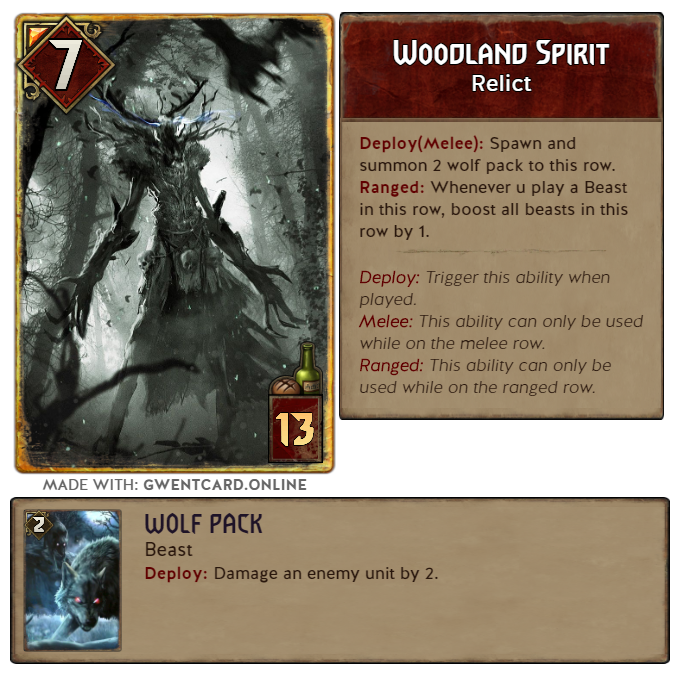 Woodland Spirit is the last piece for beast archetype. He is a great and scary threat in a long round, which will always make your opponents wanna bleed you.

How new archetype could work?

Our deck is quite strong when it comes to winning the first round. With the ability to swarm the board very quickly, we can use the full potential of our boost cards while putting hard pressure on the opponent.

An example strategy we can use is: Winning the first round using a few cheap golds and bronzes including Morvudd or Werecat. In the second round we try to push our opponent using a combination of three cards: Slyzard– Plague Maiden– Morvudd/Werecat (depends on which we used earlier). We push our opponent a bit because we don’t need very long round three, 6-7 cards should be enough. The third round is quite easy to play- we start with playing Woodland Spirit in ranged row, then we row-stack until we have only one free space in the row. Last play is very straightforward- just use Renew on Werecat or Morvudd to finish game with a big point swing.

Currently beast archetype does not reach the threshold for being competitive. Let’s hope that we will get more beast synergy in the near future.